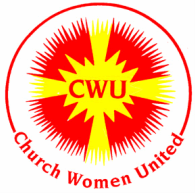 The logo of Church Women United is a circle with the exploding sun at the center. The rays suggest the dynamic force, vitality and life of the sun as our source of light and from Jesus, the Son, and our Source of Enlightenment. The rays also indicate movement, action and power; a coming and going as God’s people return to the Source for strength and then go out into the world in mission. The texture and richness of the rays symbolize the qualities the Christian women can contribute to the world. Texture relates to the way constituent parts are woven together. So it is that in Church Women United, Christian women from diverse backgrounds unite in a way that provides body and fullness for witness in a pluralistic, changing society.

Since 1941 women of the Church Women United Movement have held a vision of Christian unity and prayerful action. CWU was founded as a racially, culturally, and theologically inclusive Christian women’s movement to celebrate unity in diversity and work for peace in the world.

At its founding, the Movement was named United Council of Church Women (UCCW). Women of faith from three interdenominational women’s groups representing 70 denominations convened in Atlantic City, NJ in December, 1941 while bombs were being dropped and the world was at war. The United Council of Church Women’s first action was to circulate a petition signed by 84,000 church women “urging the United States at the signing of the United Nations Charter, to join and take its full responsibility in a world organization.”

The action received wide publicity in the media and Eleanor Roosevelt later involved the UCCW in a conference at the White House on “How Women May Share in Post War Policy Making.” Such action remains typical for CWU today as its quest for informed prayer for prayerful action continues. Women of the Movement affirm that prayer and action are inseparable and that both have immeasurable influence in the world. For more history read M. Shannon’s Just Because and CWU’s 60th Anniversary Memory Book.

Church Women United (CWU) is a national volunteer Christian ecumenical women’s movement initiated and carried out by women in the United States and Puerto Rico. It is a movement that brings together women of diverse races, cultures and traditions in closer Christian fellowship, prayer, advocacy, and action for peace with justice in the world. CWU engages millions of women representing twenty-six supporting denominations and participating Christian women